North Korea’s development of nuclear and ballistic programmes is a threat to regional and international security and stability, and is a violation of international law. Faced with this crisis, France and its partners have supported the adoption of sanctions aimed at stopping North Korea from continuing its weapons of mass destruction programmes and bringing it to the negotiating table with one goal: complete, verifiable and irreversible denuclearization of North Korea.

North Korea acceded to the Treaty on the Non-Proliferation of Nuclear Weapons (NPT) in 1985. It has developed a military nuclear programme, in violation of the NPT, and has announced its intention to withdraw from the treaty. North Korea carried out six nuclear tests between 2006 and 2017, and is the only country in the world to have engaged in such tests in the 21st century. At the same time, it has implemented a major ballistic missile programme, developing missiles with increasingly long ranges.

The development of these weapons of mass destruction programmes is a violation of the international non-proliferation regime, of which the NPT is a pillar, and of UN Security Council resolutions. As such, it undermines international security as a whole.

France and its partners have vigorously condemned the continuation by North Korea of its weapons of mass destruction programmes, which are a serious threat to regional and international peace and security. For France and Europe, this is a direct threat, as some North Korea missiles have sufficient range to strike French and European territories, and also an indirect one, as North Korea transfers proliferating capacities and technologies to other States.

In response, the international community has adopted a significant sanctions regime

As a permanent member of the United Nations Security Council, France has supported the adoption of resolutions instituting sanctions against the North Korean regime. These resolutions aim to put an end to the illegal programmes and bring Pyongyang to the negotiating table, with measures that limit its resources. The sanctions include a total embargo on trade in any types of arms with North Korea, as well as a ban on importing certain products from the country, such as coal, iron or ores, and a prohibition on exports of other products there, such as luxury goods. Several entities and individuals linked with weapons of mass destruction programmes have been sanctioned with asset freezes and travel bans.

The complete and effective implementation of these sanctions is a priority for France and its partners in the absence of tangible progress towards complete, verifiable and irreversible denuclearization of North Korea. The work of the UN Panel of Experts on North Korea, which France is committed to, has demonstrated that North Korea is using various strategies to avoid sanctions. Regular discussions are held to improve the implementation of the various dimensions of the sanctions regime, such as within the G7+ group that met in Paris in March 2019.

France and its partners are committed to reaching out to countries that may be concerned by North Korean attempts to avoid sanctions and France is ensuring that French businesses are aware of and enforce sanctions regimes. France has also deployed maritime surveillance assets in the region to monitor and prevent sanction violations at sea (oil transhipments, which are forbidden by Security Council resolutions).

North Korea needs to take the path of complete, verifiable and irreversible denuclearization

Like its partners, France supports efforts to find a political solution. France supported the opening of inter-Korean dialogue in early 2018 and talks between the US President and the North Korean leader (summits in Singapore in June 2018 and in Hanoi in February 2019). These negotiations have helped bring about a welcome reduction in tensions in North-East Asia. They now need to help bring an end to North Korea’s provocations and open the way for “complete, verifiable and irreversible” abandonment of the country’s nuclear and ballistic programmes, as well as its other weapons of mass destruction programmes (biological and chemical weapons).

In a declaration supported by 69 partners, France reaffirmed at the Preparatory Committee of the NPT Review Conference (April-May 2019) that North Korea needs to “translate its words into actions and to take practical steps towards the complete, verifiable and irreversible abandonment of all its nuclear weapons and ballistic missiles as well as all associated programmes”.

France is particularly committed to ensuring that the measures taken by North Korea can be verified by international experts like those of the International Atomic Energy Agency (IAEA) to guarantee their effectiveness and irreversibility.

At this stage, the threat posed by the existence of nuclear and ballistic programmes in North Korea has not diminished, as these programmes have been neither abandoned nor scaled back. Without progress on North Korea’s part in this area, the international community must remain united, firm and vigilant. 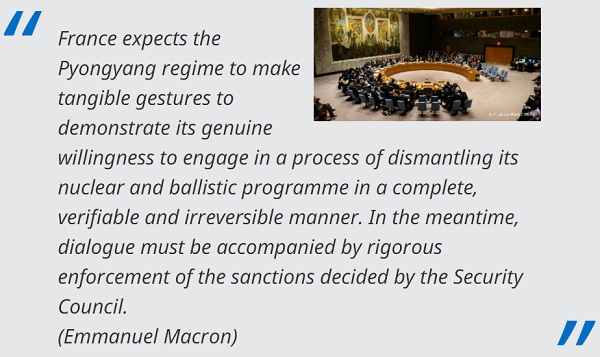 France has proposed to provide its support and expertise for a future denuclearization process. Its own experience in dismantling certain nuclear facilities (including its test sites and certain reactors) and its status as a nuclear-weapon State make France an important contributor to the process from the technical expertise standpoint.