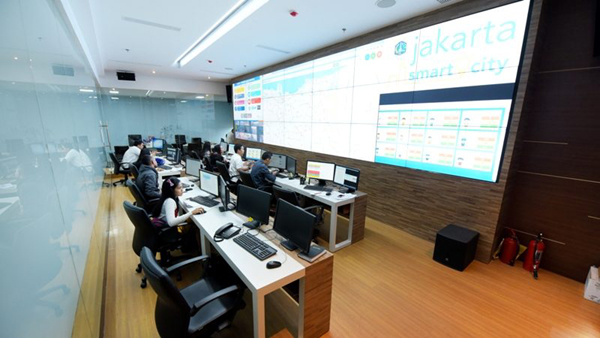 Jakarta. Indonesia’s rapid transformation from a rural to urban economy has served as one of the benchmarks for the country’s massive growth potential, while simultaneously underscoring several challenges it needs to confront.

With nearly 70 percent of the country’s population expected to live in cities by 2025, the public and private sectors must come up with innovative ways to allow citizens to benefit from this rapid transition, lest they further succumb to traffic congestion, pollution, or disasters resulting from past underinvestment in cities.

Infrastructure development must keep up with demand, while investment in innovative solutions can contribute to sustainable living.

The smart city concept offers a new approach for some of Indonesia’s major cities, which have undergone significant growth, but it can also benefit others in the archipelago to prepare them for the expected population growth.

The concept is centered on how urban development can integrate information and communication technology and the Internet of Things (IoT) in a secure and effective way to manage public assets and resources, including traffic and transportation systems, waste management and law enforcement.

Jakarta, like several other Indonesian cities, is undergoing the transition to a smart city as part of the regional government’s efforts to increase living standards and ensure sustainable resource management, and in response to issues that have long adversely affected residents, such as poor air quality, vulnerability to floods and the perennial problem of traffic congestion.

The Jakarta Smart City program, launched in 2014, aims to promote and implement smart city initiatives, including people, mobility, living standards, economics, the environment and government. It has since become the provincial government’s hub for the latest technology.

The program seeks to encourage city officials and citizens to increase the daily use of smart city technologies, such as the public transportation app Trafi and communication app Qlue, that provide citizens with a platform to voice their concerns and aspirations.

Bandung in West Java has also been ambitious in developing its own smart city technologies.

The city’s Command Center was the first of its kind and the concept has since been implemented in other cities in Indonesia, including Jakarta. The local government has also expressed interest in incorporating a smart surveillance and monitoring system, as well as smart lighting, which may well be in the city’s near future.

Surabaya in East Java has implemented a form of e-government that allows financial matters to be managed through an online-based system.

The city administration of Makassar in South Sulawesi issues residents with smart cards that can be used for cashless financial transactions. The city also implemented a surveillance system to monitor roads and traffic.

Medan in North Sumatra is currently working on a plan that puts the emphasis on a smart transportation system.

These cities illustrate the enthusiasm for effective and modern technology in the future, and they are paving the way for well-rounded development to cater to the needs of Indonesia’s urban population.

In Indonesia, regional governments are responsible for urban development, under the supervision and guidance of the central government.

While regional governments are expected to finance, maintain and rehabilitate infrastructure, most of their budgets are spent on salary expenditures, Public Works and Public Housing Minister Basuki Hadimuljono said.

“Alternative sources of funding are crucial to support the development of infrastructure in this country,” Basuki said in a statement.

There is some help at hand. In June last year, the World Bank and the Swiss government established the $13.4-million Indonesia Sustainable Urbanization Multi-Donor Trust Fund to help the Southeast Asian nation ensure that its urbanization process is economically, socially and environmentally sustainable.

The bureaucracy, administration and coordination are also crucial elements to consider in the implementation of such development projects.

Malcolm Foo, a global adviser at PricewaterhouseCoopers Consulting Indonesia, believes the establishment of a dedicated unit focused on coordinating smart city initiatives and programs would help to enable effective implementation.

“Mayors, for instance, can set up a unit that reports to him or her directly, which coordinates smart city initiatives across the government’s departments and agencies,” Foo said.

“Proper planning – developing a smart city roadmap – is critical for gaining buy-in, resourcing and sequencing the initiatives, because some may have interdependencies with others,” Foo said.

Indonesia must also consider its increasingly well-connected citizens, especially as the number of smartphone users in the archipelago is expected to grow from 55.4 million in 2015 to 92 million by 2019, according to market research company eMarketer.

Smartphone usage will be closely linked to the development of smart city technologies. Research conducted by The Economist’s intelligence unit under the title “Empowering Cities,” highlights the importance of engaging citizens through advances in digital technology to “provide a steady flow of feedback and ideas to city officials” that are crucial to shaping a city in which all stakeholders have a voice.

Still, it’s important for regional and city governments to prioritize how those technologies can contribute to each city’s sustainability, business climate and living standards, while addressing unique needs.

“Not all smart city initiatives have to be about technology,” Foo said. One example of this is small charges on plastic shopping bags. The initiative forms part of an effort for cities to become more environmentally sustainable, and it has proved effective in reducing plastic waste as people start to use reusable bags.

A pilot project Indonesia implemented last year involving customers being charged for plastic bags met with varied success rates in different cities in the archipelago. Due to some retailers having shown reluctance to continue the policy, the government is currently looking at creating incentives and considering its next step to reduce plastic waste.

Lippo Karawaci director Jopy Rusli said a smart city starts to manifest from the design and planning stage. That is what Lippo does with its latest city development, Meikarta, on the eastern outskirts of Jakarta.

“For instance, the city’s road network adopts a grid system like those in Melbourne and New York. We also built it in four layers to reduce the likelihood of traffic congestion,” Jopy said.

“All [modes of] public transportation in Meikarta are designed to link up with each other, equipped with sensors and CCTV to allow a fast response during emergencies,” he added.

Foo emphasized the importance of a “continuity of vision and leadership,” and said these aspects are key to realizing smart cities.

Long-term regional plans and clear accountability for implementing them serve as a backbone to ensure that progress continues even after leadership changes take place, especially because the vision of a smart city tends to evolve as time goes by.

“[Another] critical success factor is the capability of the people who are responsible for driving and implementing the vision. Do these people have the capacity, the digital competency, the problem-solving ability, the imagination to implement it, to create the right conditions and policies to promote the growth of a smart city – that’s the challenge,” Foo said.

He added that education and training of city staff is also critical, alluding to the possibility of gaps between a given technology and the staff who will use it.

“We need to put schools around the table so that they can take part in some of the discussions. […] What we are working on is a long-term, beneficial partnership and collaboration, including in education, the training process, understanding each other and doing business,” said Rachid Boulaouine, a trade counselor at Business France, which has been working with some Indonesian cities to address urban issues over the past years.

Cooperation with countries such as France and Sweden may play a key role in the country’s urban development.

In October, Indonesia and Sweden agreed to increase technical cooperation and technological transfers, with the archipelago seeking to apply the Swedish triple helix model, which involves cooperation between the government, private sector and universities.

In February, the representatives of French companies involved in sustainable urban development visited Jakarta, Bandung, Surabaya and Palembang, South Sumatra, where they shared their expertise on how Indonesian cities can be transformed effectively to meet the needs and demands of their citizens.

Business France’s work has largely focused on the development of sustainable city programs, where cooperation has been alongside local public agencies such as Jakpro, as well as local governments, including from Bandung and Surabaya.

The commission’s City of Tomorrow program will showcase green transportation and smart building solutions in January and April next year, respectively.

In an interview with the Jakarta Globe, Boulaouine said partnerships with local counterparts have been essential for the projects carried out by French companies in Indonesia.

“They [French companies] need a strong partner in which they can rely on in terms of developing, maintaining, training, educating and understanding the market. A French company will bring the technology and there is a local partner who is going to tell us how the technology needs to be implemented,” Boulaouine said.

“There’s a very strong interest from the European Union and Swedish companies to invest in Indonesia. […] Some Swedish companies rely on having strong partnerships with local businesses,” Anders Wickberg, Business Sweden trade commissioner to Indonesia, told the Jakarta Globe.

Business Sweden is set to take Swedish companies on a roadshow to Jakarta, Bandung and Makassar in November, aiming to establish long-term dialogue and relations with Indonesian stakeholders and give them an opportunity to showcase Swedish solutions for smart cities, technologies and urban transportation.

“We’re actively trying to go outside of Java to really establish relations and understand what’s going on there and engaging with them,” said André Nilsson, a Business Sweden consultant.